At CES many of our plastering and rendering machines will either require a compressor to operate or, with some of the larger machines, come with a built-in compressor. Compressors are a key machine that almost all industries rely on. They are vital in manufacturing operations as well as being used in the construction industry and by the medical profession.

Compressors are used to give machines power by converting one form of energy to another. There are huge variations in machines as a compressor that is used to power a small drill at the Dentist will be very different to the compressor that powers a whole manufacturing plant. At CES you will come across models such as the Gentilin C330/03 Portable Compressor which is available for hire or purchase. Alternatively we offer the Clarke XEPV16H/50 Industrial Air Compressor also with purchase or hire options. In simple terms, the machine works by forcing air into a small space to increase the pressure. When the tanks pressure reaches the upper limit the air compressor will shut off. You are then able to use the compressors stored air to power your tool. As the pressurised air is used up the compressor will kick-in again to replenish the air, the process is called ‘positive displacement’. When air is harnessed in this method it is an incredibly powerful force which matches or even betters it’s electric, diesel or petrol counterparts. Since pressurised air is such a powerful force it should be handled with care. Be sure to read our blog on maintenance and safety to keep your compressor in the best possible condition. 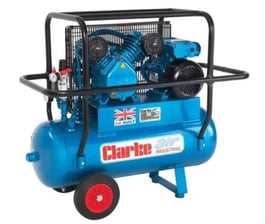 An air compressor is different from a pump which deals with liquids; a compressor works with gas/air. The compressors tank is measured in litres according to how much air it can store. The term PSI is used measure the air pressure and stands for pounds per square inch. There are three types of mechanism that can operate an air compressor. The most common is the piston pump which works by the piston pulling in air on the down motion and forcing it into the tank through a one-way valve on the upward motion. You may also come across a machine operating by rotary screw in which two helical screws rotate to force air into the tank. The final mechanism could be a vane which works using a rotor with slots and blades to pull in air.

When weighing up the options for purchasing an air compressor, take into account the tools you’ll be using. If your tool requires prolonged use, you may find a small tank won’t cut it. If the air in the tank cannot be replenished quick enough, you will have to constantly stop using your tool to allow the pressurised air to build-up again. A small tank will suffice if your tool is needed in short bursts.

Now you know a little more about what an air compressor actually is, check out our blog which gives you tips on how to operate your compressor. 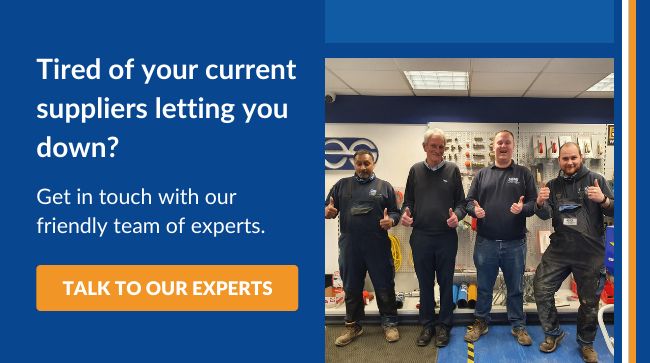